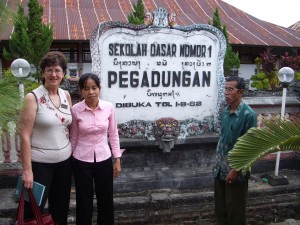 When the bombs exploded in Bali on 12th October 2002 it changed many lives forever. From the comfort of my home in Perth, Western Australia, I watched the news coverage unfold. I was at a loss to understand the senseless misery inflicted on a people who had always been so kind and generous to foreigners, particularly Australians. My “heart response” was one of compassion and my “head response” wa sa determination to give something back to the beautiful people of Bali. Five days after the bombing, I read an article in the newspaper about three expatriate West Australians. They were running busnesses in Bali and many of their employees were now suffering directly, due to the loss of the breadwinner of the family. David Wedd, Norman Rowe and Moira Mitchell started matching Balinese widows to foreigners who wished to sponsor a family. They called their project AdoptaVictim. In November 2002, my family began to sponsor one of these families.

Through our contact with our Bali family, I became aware of the difficulty some families were experiencing in paying school fees and meeting the costs associated with education. I could see an opportunity for our schools in WA to assist these children, not just financially, but through providing an exchange of cultural experiences. After discussions with David Wedd, he offered to approach the five schools in Baturiti district, whcih were close to his business. He found the headmasters were very keen for any assistance we could provide. AdoptASchool was born in Novemeber 2002. Initially I matched the first school with Mt Hawthorn JPS and have been steadily doing so ever since. David later directed me to Freddie Subiyanto (now deceased). Mr Subiyanto located several schools and then put me in touch with the, High School teacher and Rotarian, Wayan Tur Adnyana. Mr Adnyana became my main contact in Bali. 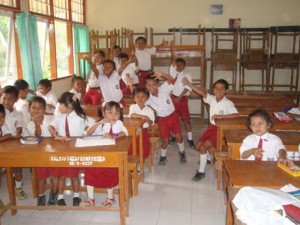 In 2005 AdoptASchool became an incorporated Association, managed by executive committees, both in WA and Bali. The Association is run by volunteers and has no formal ties to any government, private or religious organizations. It remains a cross-cultural initiative which links schools in WA with a school in Bali. It was established to facilitate friendships and cultural understanding between teachers and students in WA and Bali. It operates as a sister school project. A membership coordinator pairs up schools and these schools exchange letters, drawing and artworks depicting life in their schools, communities and countries. Often educational resources are sent to Bali and some schools undertake fundraising to assist in projects which the Balinese headmaster has earmarked as a priority.

The foundation of AAS was driven by the virtues in us all-compassion, trust, integrity, respect, friendliness, generosity and purposefulness. It relies on the commitment of individuals to improve cultural understanding and strengthening the aspects of our humanity which bind us in unity. It promoted respectful interaction between adults and children from vastly different backgrounds. 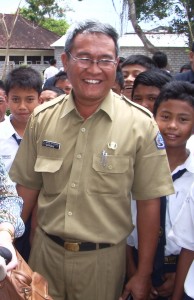 By members participating in AAS, I aim to personalise the contacts we have with our Indonesian neighbours. I believe this will lead to harmony and peaceful co-existence for all of us living in this geographical region.